The Royal Swedish Navy Band has its roots in the 1680s and has operated uninterruptedly since then. The band is today one of the Swedish Armed Forces three professional bands and it comprises 30 full-time professional musicians. The band makes more than 100 public appearances each year, in relation to o cial state visits, royal audiences, changing of the guards, regimental ceremonies, tattoos and concerts. The band performs in a large number of concerts, covering a wide repertoire of wind music genres for diverse target groups, aiming to reach new audiences. During these appearances the band is a good marketing and recruitment resource for the Armed Forces.
The Royal Swedish Navy Band is a part of the Armed Forces that operates in Sweden and abroad. The band has taken part in missions in Bosnia, Kosovo and Afghanistan, among other places, providing both ceremonial music and musical entertainment for morale maintenance.
The Navy Band is stationed in the world heritage town of Karlskrona. 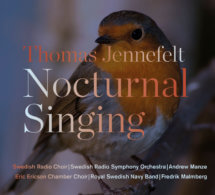