Vokalharmonin was founded in 2004, as an ensemble specializing in the interpretation of early and contemporary vocal music. Fredrik Malmberg has been the Artistic Director from the start.

The ensemble’s chief interest lies in exploring new sounds and vocal techniques, which has led to a close collaboration with several of Sweden’s leading composers. Other musical partners, in Sweden and abroad, include specialist ensembles and orchestras, independent theatres, electronic studios and music festivals.

In 2004 Vokalharmonin was appointed Artist In Residence at the Swedish Radio, and in 2007 the ensemble was selected Choir Of The Year by Rikskonserter (Concerts Sweden).

The ensemble’s recordings have been critically acclaimed, and the CD’s Charpentier – Sacred Works and Soavi Accenti were both nominated for a Swedish Grammy. 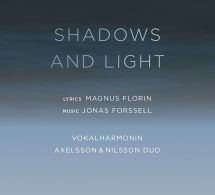