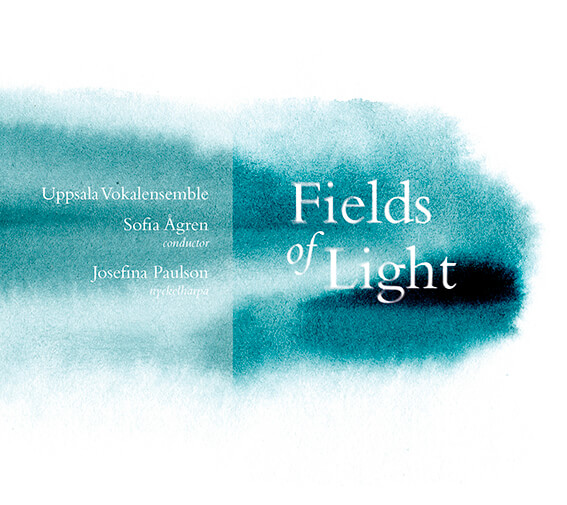 Composer Matthew Peterson, nyckelharpist Josefina Paulson and the Uppsala Vocal Ensemble invite you deep into Swedish nature, literally and figuratively. Footprint Records is proud to present Fields of Light – an exploration of Sweden’s folk traditions, its distinctive light from dawn to dusk and the strain of melancholy that lies underneath its national songs and dances.

Peterson’s mystical settings of verses by the Finnish poet Edith Södergran (1892-1923) range from nuanced, minor-key nocturnes to frolicking dances, all of them woven with the plaintive, resonant thread of Josefina Paulson’s nyckelharpa – the ‘keyed fiddle’ that is Sweden’s national folk instrument. In between, Paulson’s instrument leads renditions of Swedish folk songs for all seasons, sung in evocative arrangements.

Peterson is an award-winning Swedish-American composer known for his work on both sides of the Atlantic. He describes Södergran’s poems as ‘lyrical and free, rich in colour and detail,’ an apt description of his own atmospheric and deeply absorbing choral music, which uses much more than the vocal chords to evoke its broad, luminous landscapes. His works are sung here by a radiant, precise and beautifully blended Uppsala Vocal Ensemble under musical director and principal conductor since 2011, Sofia Ågren.

In Josefina Paulson, the choir collaborates with one of the most respected exponents of the nyckelharpa and 2016’s World Nyckelharpa Champion. She joined the singers and Ågren in the warm acoustic of Bäringe Church to create a recording that combines atmosphere, resonance and perfection to magical effect.